Your local dentist is able to evaluate your brushing habits during your routine visit. However, it is also helpful to know some of the symptoms of brushing your teeth too hard. Observing and correcting your brushing habits before they cause real problems will go a long way in preserving your oral health and overall wellbeing.

I’ve found that my brushing needs to be firm enough to remove food and clean my teeth thoroughly while not over doing it. What are some signs that I am brushing too hard?

Although your dentist will be able to best evaluate your brushing habits, it’s also wise to constantly evaluate your oral hygiene on your own between office visits. Many of the signs of over brushing are easy to spot as long as you know what to look for.

1. Bristles of a Toothbrush will begin to Fray or Fan

The easiest way to evaluate your brushing habits is by simply looking at your toothbrush. Although the bristles of a toothbrush will begin to fray or fan out towards the end of the brush’s lifespan, this should not be happening until that point (around 3 months). If you find that you are having to replace your toothbrush more than normal, you are likely brushing too hard.

2. When you Brush too Hard Your Gums will begin to Recede

Another way to determine if you are brushing too hard is to look at your gums. When you brush too hard, you cause your gums to recede which will reveal more of your tooth. Red or inflamed gums are typically signs of gum damage (and occasionally gum disease). Damaged gums can also bleed during brushing which will warn you of overly aggressive brushing habits. Bleeding gums are also a warning sign of periodontal disease, which is definitely something you need to discuss with your dentist.

3. When You Brush too Hard Your Teeth will become more Sensitive

You may also find that your teeth are becoming more sensitive. Hot or cold foods start to bother your teeth or brushing may become uncomfortable. These are all warning signs that you are brushing your teeth too hard. While these symptoms may seem menial at the time, they will become increasingly more frustrating as time goes on. It is important to address tooth sensitivity before it is too advanced. 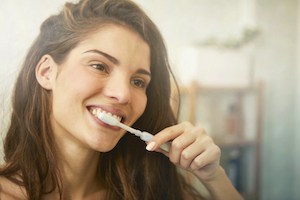 Problems Caused by Over Brushing

There are many problems that can be caused by brushing your teeth too hard. The most prevalent problems are:

Once you begin to evaluate your brushing habits, you must also learn how to prevent over brushing your teeth. Practicing proper brushing habits will go a long way in preserving your oral health. It is a common myth that brushing your teeth with great force will be more effective than using a softer approach. This is simply not correct. Using the proper equipment and technique will have a much better outcome in the long run.

Use a soft-bristled toothbrush to prevent damage to your tooth enamel and gums. Brush for roughly two minutes for a thorough cleaning. Moving in an established pattern around your teeth each time you brush will ensure that you clean every surface area which will help prevent cavities.

Using circular or short back-to-front strokes coupled with light pressure will allow you to brush the surface area of each tooth. This method will also prevent any damage that would be caused by brushing your teeth too hard. If you feel you are “sawing” back-and-forth, you are definitely brushing in a manner that is too aggressive.

The bristles of your toothbrush should meet your gums at a roughly 45-degree angle. Brushing your gums with the brush straight on will exacerbate them causing gum damage which will lead to gum recession or even periodontal disease. Although it is important to brush the area around the base of your tooth, you must approach this step with much care as the gums are very sensitive. How to Reverse the Damage Done to Your Teeth

Although the damage done by brushing your teeth too hard can often be permanent, there are a few ways to reverse the damage done if it is caught early enough. This is one of the many reasons why it is important to visit your dentist on a regular basis for routine dental exams.

Learning proper brushing technique is the first step to reversing the damage that has been done to your teeth because of over brushing. Creating the healthiest of conditions for your teeth and gums can aid them in naturally healing themselves in certain situations.

Sadly, you are not able to restore the enamel on your teeth once it is damaged. You are, however, able to strengthen the enamel that remains. This is wonderful news if your over brushing has caused tooth abrasion. Using a toothpaste with fluoride, a strengthening agent, will aid in this process. Many dentists even advise sealants which help prevent further erosion and tooth decay. Your dentist will aid you in making the best decision for your individual situation.

There are a few ways to treat receding gums which were caused by brushing too hard. If the damage is minor or still in the early stages, a thorough cleaning could rectify the problem. However, if the recession is in an advanced state, a dentist may suggest periodontal surgery. It is important to follow the suggested course of action as your gums protect your teeth and the surrounding tissues. Ignoring gum recession may result in more serious periodontal disease or tooth loss.

While we have found that it is certainly possible to brush your teeth too hard, there are several ways to prevent damage from progressing to a more serious stage. Learning to evaluate your brushing habits will aid you in catching the early signs of over brushing.

Once you are able to identify the symptoms of over brushing, it is important to follow proper brushing techniques. By using the correct equipment and following a few simple guidelines, you will be able to keep your teeth clean while maintaining the overall integrity of your teeth and gums.

Finally, if you are concerned you have damaged your teeth by brushing them too hard, a visit to your dentist is the next step. After a dental exam, your dentist will advise a suitable course of action to rectify the damage that has been done. If you have caught the damage early on, simple cleaning and change to your oral hygiene habits may be all that is required. How often should you brush your teeth? The American Dental Association recommends brushing your teeth twice a day following proper brushing techniques. While it is important to brush your teeth twice a day, it is also necessary that take your diet into consideration. You must always wait at least 30 minutes after eating anything that is highly acidic. Brushing your teeth after an acidic drink or meal will result in the enamel coming directly off your tooth. This is obviously very counterproductive to your oral hygiene efforts.

It is also wise to floss your teeth once a day and maintain your regular dental exams for the best possible oral health.

Brushing your teeth eliminates bacteria which eventually leads to the formation of cavities. Bacteria in your mouth is also the most common culprit behind bad breath. There are many other ways to support proper oral hygiene such as using mouthwash, flossing, and routine dental cleanings. However, daily brushing is crucial to maintaining proper oral health.

When Can I Eat After a Crown?

When Can I Eat After a Filling?

When Can You Exercise After Wisdom Teeth Removal?

When Can You Brush Your Teeth After Wisdom Teeth Removal?

Why Does My Toothbrush Turn Yellow?

When Can I Eat After a Crown?

When Can I Eat After a Filling? Ways to Remember to Brush Your Teeth (That Actually Work)

How Can I Remember to Brush My Teeth? Here are 24 Ways that Actually Work Brushing your teeth is one of the most important... Do You Really Need to Brush Your Teeth Twice a Day?

We have heard all of our lives that it is imperative to brush your teeth twice a day. While many of us have created... Is it bad to brush your teeth 3 times a day? The Answer Will Surprise You

Is it bad to brush your teeth 3 times a day? The Answer Will Surprise You When I was in college, I usually only...