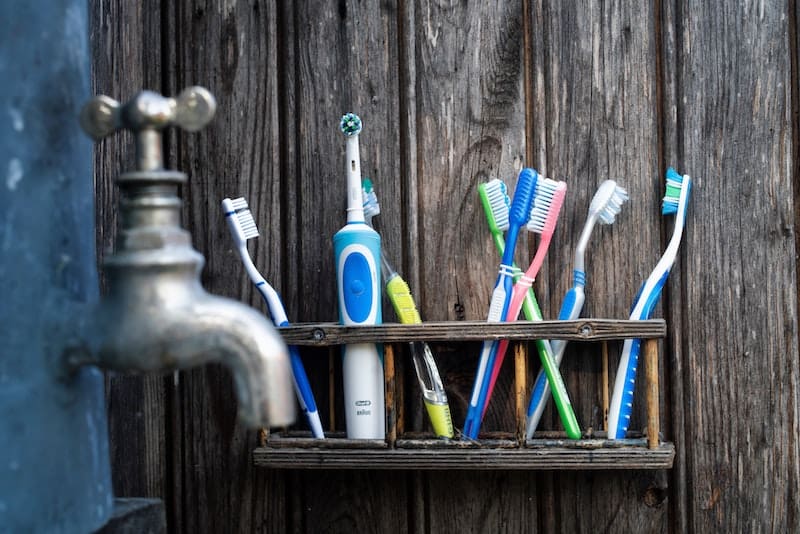 You may assume that brushing your teeth in a weird scenario is better than not brushing at all, right? While this is true, it does not justify letting your tooth brushing routine fall to the wayside in an attempt to save a few minutes. One of the most common ways people attempt to multitask while brushing their teeth is to brush their teeth while in the shower.

What You Need to Know About Brushing Teeth in The Shower

We get it, some days just call for multi-tasking. Whether your alarm clock just didn’t go off or you are simply running a bit behind, brushing your teeth as you shower may seem like a great way to save a few minutes! Before you adopt this habit as routine, however, there are a few things you must know.

Why Do Some People Brush Their Teeth in The Shower? 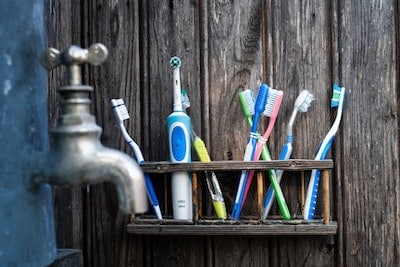 Here are some of the most common reasons (and arguments) people have for brushing their teeth in the shower.

Brushing Your Teeth in The Shower May Save Water

An alternative to this method is to brush your teeth at the sink, turning off the faucet as you brush your teeth. According to the Environmental Protection Agency (EPA), this simple change can conserve up to four gallons of water each time you brush. Talk about making a positive impact!

Brushing Your Teeth in The Shower May Create Less Mess

For some people, brushing their teeth in the shower may simply seem like a way to create less mess in the morning. While there is certainly merit to this argument, it likely does not make that great of an impact on the cleanliness of your bathroom.

Brushing Your Teeth in The Shower May Save Time

Finally, many people brush their teeth in the shower in an attempt to save a few minutes. While we fully encourage multitasking, it is not recommended to multitask while brushing your teeth. In order to thoroughly clean your teeth, you need only two minutes twice a day.

Instead of sacrificing the cleanliness of your teeth for two extra minutes outside the shower, consider other ways to multi-task to accelerate your morning routine. Some other ways you can save a few minutes each morning include setting your clothes out the night before, packing your lunch before you go to bed, or even setting your coffee pot to automatically start each morning.

With a bit of creativity, you can make up for the two minutes you will spend brushing your teeth outside of the shower – and then some!

Reasons to NOT Brush Your Teeth in The Shower

The warm, damp environment in your shower encourages bacteria and mold to grow on your toothbrush. Your toothbrush must have proper ventilation to dry between each use. This is simply not possible if you store your toothbrush in the shower.

You can learn more about storing your toothbrush properly here.

Brushing in Front of a Mirror Allows You to Brush Thoroughly

When you brush your teeth, you must be able to ensure that you are brushing each area thoroughly. Oftentimes, this is best done in front of a mirror. While you may use a small shower mirror, this is not sufficient to provide you with the insight you need. Brushing your teeth outside of the shower allows you to carefully observe your brushing routine to make sure that no surface is overlooked.

You May Become Distracted From Brushing in The Shower

Whether due to the warm running water or the urge to break into song in the shower, there is a great possibility for distraction while you are brushing your teeth in the shower. You must be able to dedicate a full two minutes of your time to brush your teeth without distraction.

Flossing is Impossible in The Shower

Daily flossing is not just a senseless task that is encouraged by your Athens Dentist. In fact, flossing is the only way to clean the hard-to-reach surfaces of your teeth. Bacteria and debris quickly accumulate between your teeth, leading to plaque formation and eventually tooth decay or inflammation.

Let’s face it, flossing in the shower is impossible. The combination of the water and the slippery dental floss make shower flossing an acrobatic feat. It is important to spend time each day thoroughly brushing and flossing your teeth to maintain optimal oral health and eliminate the potential for tooth decay or gum disease.

The Best Way to Brush Your Teeth

So, we have established that brushing your teeth in the shower is not a habit to form. But what is the best way to brush your teeth? Whether you have bad brushing habits that were instilled in childhood or you have simply lost track of proper brushing technique, it is important to refresh your mind on the best brushing practices.

The American Dental Association recommends brushing your teeth twice a day for two minutes each time. This is the amount of time needed to thoroughly clean each surface of every tooth. In addition to twice-daily brushing, it is also recommended to floss once a day. Some people also choose to use mouthwash or a Waterpik for an added sense of cleanliness.

Establishing proper brushing habits is one of the best ways to promote not only optimal oral health but overall health and wellness. If you currently brush your teeth in the shower, do not be discouraged! Having this habit is better than not brushing at all. Simply take steps to transition your brushing time to outside of the shower. In doing so, you can dedicate more attention to the task at hand.

Hi, I'm Matt and I'm one of the writers here at Modern Dental Hygiene. For over 10 years I have been working directly with dentists. My goal is to help you understand the basics of dental hygiene. I enjoy writing about everything related to brushing, flossing and taking care of your teeth. In my spare time, I'm either spending time with my family, doing a DIY project or learning a new skill.

Why Does My Tooth Have Brown Spots? A dental crown is a restoration that covers and strengthens a tooth that has been damaged or weakened. Crowns are made of different materials,... If you have ever had a filling, then you may understand the reservations behind this question. It’s tough to go to the dentist anyway,... The answer to this question depends on several factors, including the type of tooth that was extracted and the person’s overall health. In general,... Prevent Halitosis With These Effective Tips Halitosis is a common oral problem that affects millions of people worldwide. When expired air moves past the...